Home > DNA in the News > Resurrecting the DNA of Extinct Animals

Resurrecting the DNA of Extinct Animals 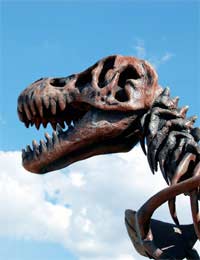 It's almost a surreal experience to contemplate extinct animals such as dinosaurs and many others that roamed the Earth long before our time. Yet, is extinct really forever? In the case of a recent study, perhaps not.

Scientists conducted an experiment that allowed them to make use of the DNA of an extinct animal. While it certainly wasn't the genetic material of the well-publicised dinosaurs of Jurassic Park, it did still involve a rather robust animal that roamed the Earth on a much more recent basis during the previous century.

The research has particularly important implications because it triggers the question of whether extinction truly is absolute. In a sense, it could cause us to have to evaluate our approach to extinction and consider the ethics and other issues that may play a role when an extinct animal is resurrected.

Researchers wanted to investigate if the DNA from an extinct animal could still be used in a live organism for therapeutic benefit. The experiment was one that had never been done before but it did prove successful. It will likely also prompt further research into the use of DNA from extinct animals, assuming the genetic material has been well-preserved and is sufficiently accessible as well.

They isolated genetic information from the Tasmanian tiger, which became extinct seventy years ago. Then, they inserted it into mouse embryos, where it contributed to the development of cartilage and eventually, bone. The research is particularly groundbreaking because it is the first time that an extinct species has been used in a DNA experiment to trigger a physiological response in a different living organism.

An issue with animal extinction is that as we lose more species of animals, we also lose important information of how their genes work as well as the animal's potential in science. Some researchers have stated that the Tasmanian tiger should be resurrected by using cloning technology but other scientists disagree, citing that the DNA of the tiger is probably not preserved to the extent that it will provide the necessary quality for cloning.

While the Tasmanian tiger did become extinct, some specimens were kept and then used in this recent experiment. After the DNA of the tiger was inserted into the mouse embryos, the DNA was essentially 'turned on' and supported the production of cartilage, which is part of the process for bone formation.

Using the DNA of Extinct Species

The study is an important one for indicating how an extinct animal may potentially be resurrected in the future. As more and more animals become extinct due to a wide range of factors – environmental or caused by humans – we are rapidly missing out on the ability to access important genetic information that can yield clues about a number of scientific areas.

Although the concept of 'resurrecting' an extinct animal has garnered some criticism from the scientific community and the public, researchers in the study hope that the experiment highlights the potential for accessing DNA in an extinct animal and using it to benefit humans and scientific knowledge.