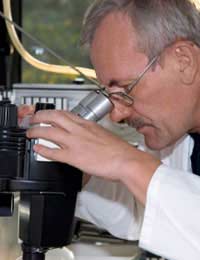 DNA discovery has allowed researchers to identify the genetic basis for many diseases. In doing so, the path has been paved for new treatments and enhanced knowledge for preventing disease. In the case of Huntington's disease, DNA plays an important role in our understanding of how the disease occurs and hopefully one day, how it can successfully be treated.

What is Huntington's Disease?

Huntington's disease is a genetic disease that affects the central nervous system. It is unusual in comparison with many other disorders in that the symptoms typically show in adults aged 30 to 40 years, although they can be evident earlier or later than this age range. Symptoms generally include involuntary movements and a loss of motor control. A person with Huntington's disease may also suffer from personality changes, memory loss and a compromised mental capacity.

DNA and its Relationship to Huntington's Disease

Those who are familiar with the basics of DNA will recall that a chromosome contains DNA, which then contains genes. Within the structure of DNA, there are nucleotides composed of a sugar, phosphate and base. In Huntington's disease, there is a DNA sequence of CAG that can be duplicated many times over, in what is known as a trinucleotide repeat. The CAG refers to the DNA bases cytosine, adenine and guanine. While the general population might have the CAG duplicated up to twenty-six times, those with Huntington's disease have it repeated from forty to more than a hundred times.

One of the questions that researchers have regarding Huntington's disease involves its late onset in life. A recent theory is that the CAG segment expands over time in cells that do not divide, such as nerve cells. Thus, the disease then progresses as time passes and symptoms present themselves when a person is in his or her 30s or 40s - perhaps a bit earlier or later.