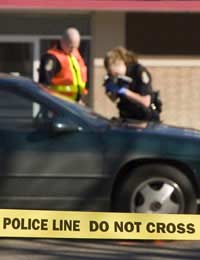 Collecting crime scene evidence requires extreme care and attention to detail. One mistake and evidence may be damaged, tainted or inadmissible in a courtroom. Given how crucial DNA evidence can be for determining innocence or guilt in a crime, its collection at a crime scene must be performed to scrupulously high standards. Not only that, but DNA transport and storage must be performed to similarly impeccable standards.

DNA evidence is literally anywhere imaginable when it comes to crime scene evidence collection. The sources may be obvious or may be more obscure, which is why evidence collection must be performed very carefully to ensure that none is missed. DNA evidence may be found on the victim, particularly if the victim fought with the attacker or was sexually assaulted. It may be found from saliva on something as seemingly unimportant as a discarded cigarette stub found on the ground near the crime scene. In fact, consider that just one hair found at a crime scene or on the victim can be enough to help convict the perpetrator of a crime.

Not only must DNA evidence be found but it must also be collected in such a way as to preserve the integrity of the DNA and preserve it for analysis. Generally, the most important pieces of DNA evidence are assessed for analysis first and then others are sequenced as needed for further information that can help the investigation.

When DNA crime scene evidence is collected, it has to be done very carefully because viruses such as HIV may be present and could pose a threat to those performing the collection. In addition, DNA need only be in a small sample to provide sufficient evidence, which means that great care must be taken not to contaminate the sample during collection, transport and storage. If a person simply sneezed on the DNA sample, this could contaminate the sample and render it difficult to assess or even useless. Newer DNA scanning and analysis technology allows for very tiny samples to be examined and any contaminants can destroy the accuracy of the sample, particularly when the technology involves replication of the DNA.

Transporting and Storing DNA Collected at a Crime Scene

Finding DNA evidence and carefully collecting it is still only a small portion of the battle to provide quality evidence. The sample must still be transported and stored in such a way that the integrity of its structure is safeguarded. Any DNA evidence needs to remain dry and free of moisture as well as stored at room temperature. After it is collected, it is typically stored in a secure bag or envelope and sealed. It also receives an appropriate label and is transported in a way that ensures it is securely monitored. If the DNA sample is properly collected, transported and stored, it can then be analysed to provide potentially important results to investigators.

Evidence at a crime scene is important to finding the correct perpetrator of a crime and helping to prevent an innocent person from being accused of a crime. If the DNA evidence is not collected according to protocol or if it is contaminated and poorly transported or stored, it may ultimately be useless for use as evidence in the case. If, however, the DNA evidence is properly collected, it can be vital in guiding the direction and outcome of a case. As technology continues to improve for analysing DNA, the basic rules of crime scene collection remain as important as ever to keep a DNA sample safe and secure.