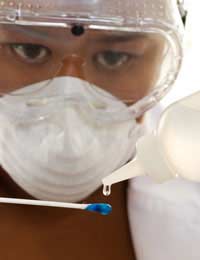 Obtaining DNA evidence is only a small part of the equation for proving a person's guilt or innocence. In fact, any forensics analysis - from criminal evidence to resolving paternity disputes - has DNA as a mere starting point. The true value lies in the outcome of DNA analysis, which can be performed through one or more of many different techniques.

PCR analysis is a technique that allows technicians to create millions of precise DNA replications from a single sample of DNA. In fact, DNA amplification alongside PCR can let forensic scientists perform DNA analysis on samples that are as tiny as only a couple of skin cells. In contrast to some other DNA analysis techniques, PCR analysis has the advantage of analysing minuscule sample sizes, even if they are degraded although they must not be contaminated with DNA from other sources during the collection, storage and transport of the sample.

RFLP is a technique that is not widely used now but it was one of the first techniques used for DNA analysis in forensic science. Large sample sizes are needed for RFLP relative to newer techniques - usually a sample would need to be approximately the size of a one-pound coin. While that in itself may sound small, it is large relative to other techniques such as PCR analysis that require only a few cells for successful sequencing. In RFLP, the different lengths of DNA fragments are analysed. These fragments are from the digestion of a sample of DNA with a restriction endonuclease enzyme. The enzyme chops DNA in a certain style - the restriction endonuclease recognition site. Whether or not particular recognition sites are present will provide different lengths of DNA fragments, which are then divided up through electrophoresis. DNA probes then serve to hybridise the fragments through complementary binding.

STR analysis works to examine individual areas in DNA. The differences from the collective areas of one person to another can allow for distinguishing between individuals. In criminal investigations, there are thirteen regions that are analysed and compared to establish profiles. In fact, DNA databases used at the government level involve the sequence of these thirteen regions. The chances of two people having the exact same thirteen regions is virtually impossible - likely one in a billion. A common DNA joke is that a person's odds of winning the lottery are higher than finding a perfect match for the thirteen regions.

Since the Y chromosome passes from a male to his son, analysing genetic markers on a Y chromosome can be of aid in identifying familial ties in males or for analysing any evidence entailing many males. Another benefit of Y-chromosome analysis is to establish a family line over many generations.

There are other types of analysis but these are some of the main traditional and current methods used to analyse DNA. No doubt, new techniques will be developed that will be even more rapid, successful and cost-effective.

Y Chromosome Analysis
Share Your Story, Join the Discussion or Seek Advice..
[Add a Comment]
What scientific knowledge would a forensic detective or scientist need?
BBKTHTSFINAL - 15-Dec-16 @ 8:35 PM
oooh, srry bb, im taken like Liam Neeson xD lol
trolleytram - 27-May-15 @ 8:30 PM
ive been on a new diet where I only eat cereal and stuff and its going well but I have a question, should I sh*t Post this much??? pls xplain tnks
trolleytram - 27-May-15 @ 8:24 PM
wow I never new pple could do that lol I wish I ws a doctor who could do all this lol xD
kat - 27-May-15 @ 8:19 PM
yeh that that's sounds fun man I will do that and I will have fun man! tnk sbut
goddog - 27-May-15 @ 8:17 PM
put the glass in a bucket and boil superglue in the bucket but make sure its upside down and then the prints will stay on! the bucket that is, not the glass. also don't breath in fumes It might kill you!
goody - 27-May-15 @ 8:14 PM
Can you do testing of DNA and finger prints for the public or for only the police? I live near Chester.Is there a CENTRE in Chester that I can take a book and a drinking glass to?I want to find out if the book and the drinking glass have the same finger prints. Also what is the best way to wrap a glass to keep finger prints as clear as possible?
Bibi - 9-Apr-11 @ 12:04 PM
Title:
(never shown)
Firstname:
(never shown)
Surname:
(never shown)
Email:
(never shown)
Nickname:
(shown)
Comment:
Validate: