Home > Disease > What are DNA Mutations?

What are DNA Mutations? 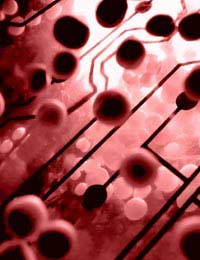 There are normal variations from one person to another. You can simply look at your friends and family to see the differences. These kinds of variations result from differences in our DNA. There are, however, differences that occur from abnormal variations in a gene and these can have detrimental consequences on a person such as disease.

How do DNA Mutations Occur?

Virtually every single person will have some sort of change to their DNA during their life. Changes can result from a multitude of mistakes, such as an error when DNA is replicated or through damage to DNA occurring from environmental or lifestyle factors. These include smoking, radiation and many others. Fortunately, your cells have special ways to handle these mistakes before they can cause damage. For some people, however, their body's repair systems can become overwhelmed if repeatedly exposed to a specific stimulus. For all of us as well, our DNA repair systems just do not operate nearly as successfully as we age. The end result for both of these scenarios is that changes in DNA will occur.

A DNA mutation can also be inherited. A germline mutation is one that can result in a disease that is clustered within one family. Some mutations can be quite specific, such as those that occur following excessive exposure to sunlight, which can cause changes in skin cells. Still other mutations may occur in the area of DNA related to sperm and egg production, which is also considered a germline mutation and is inheritable. If your child were to inherit a germline mutation from you, each cell in your child's body would carry this faulty DNA.

To understand the different types of mutations that can occur, it is important to know how a gene is constructed. Your DNA is full of genes, which are similar to words that make up a sentence. The four bases are known as adenine (A), thymine (T), guanine (G), and cytosine (C), each denoted by their first letter. Different sequences of these bases code for different proteins. If the sequence is modified, the entire meaning of the gene then changes and the instructions for producing the protein changes as well.

Point mutations are those that involve a basic change in a single base for the sequence. If we removed just a single letter from in a word or sentence, this would be akin to a point mutation. In contrast, a frameshift mutation involves the addition or removal of nucleotides. At the same time, if you think about the fact that DNA reads in sequences of three bases or 'letters,' the addition or removal of one or more letters alters every word that follows as the letters are all shifted. Therefore, the entire meaning of the sentence is changed.

Other mutations include inversion and expression mutations. In the latter, a whole section of a person's DNA is actually reversed while in an expression mutation, it is not just the protein that may be changed but the location where it is made or the amount of the protein produced. So basically, if you had this mutation, your body could be making a protein in a skin cell, for example, when it should be making it in a nerve cell.

There are obviously many different types of mutations but keep in mind that even if DNA repair is unsuccessful, the end result is not necessarily anything major or noticeably detrimental to your health. While the functions of DNA are important, many mutations happen that fortunately do not have dire consequences such as disease.

DNA and Neurological Disease
Share Your Story, Join the Discussion or Seek Advice..
Mmy family has for at least 8 to 9 generations have passed on a genetic mmutation for synphalangism beginning with my ancestors who settled in the Virginia area in the 1600.Are there other families with condition?
ann - 13-Feb-15 @ 3:45 AM
Title:
(never shown)
Firstname:
(never shown)
Surname:
(never shown)
Email:
(never shown)
Nickname:
(shown)
Comment:
Validate: