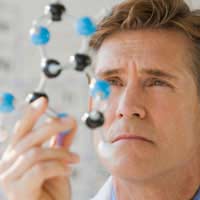 RFLP is a technique that is not widely used now but it was one of the first techniques used for DNA analysis in forensic science and several other fields. RFLP stands for 'restriction fragment length polymorphism,' which is a term that refers to a variation in a sequence of DNA that is detectable through gel electrophoresis.

In RFLP, the different lengths of DNA fragments are analysed. These fragments are from the digestion of a sample of DNA with a restriction endonuclease enzyme. The enzyme chops DNA in a certain way called a restriction endonuclease recognition site. Whether or not particular recognition sites are present will provide different lengths of DNA fragments, which are then divided up through electrophoresis. DNA probes then serve to hybridise the fragments through complementary binding.

Despite the fact that it is less widely used now, there have been numerous benefits to RFLP analysis. It plays an important role in allowing scientists to map the human genome as well as provide information on genetic diseases. RFLP analysis is useful to find where a specific gene for a disease lies on a chromosome. This is accomplished by looking at the DNA from a set of family members who suffer from the disease and then searching for RFLP alleles that share the same type of inheritance pattern for the condition. By using RFLP analysis, scientists are then able to determine others who might be at risk for the disease or a carrier of the mutated gene.

In addition to its benefits for genetic disease testing, RFLP was also one of the first methods used for genetic typing - also known as genetic fingerprinting, profiling or testing. This application was used to provide a genetic profile of a person, which could then be used to compare to samples at a crime scene or to find out a person's paternity. Not only that, but RFLP analysis also had roles in aiding our understanding of the genetic aspect of different breeding patterns in various animals.

Despite its many benefits and useful earlier applications, RFLP analysis is still a slow and more tedious process compared to some of the newer DNA analysis techniques. Not only that, but it requires substantially larger sample sizes than other forms of analysis. In RFLP, the sample would usually need to be approximately the size of a one-pound coin. While that may sound small, it is large relative to other techniques such as PCR analysis that require only a few cells for successful sequencing. The duration of the process itself is a lengthy one as well - taking up to a month to accomplish.

Polymerase chain reactions (PCR) have become a replacement for many of the previous applications of RFLP. Today, RFLP has variations such as terminal restriction fragment length polymorphism (TRFLP), which tends to have applications related to the characterisation of bacteria and related communities. It is somewhat of a blend of PCR and RFLP analysis. The technique uses PCR amplification of the DNA with primers that have a fluorescent label. After the products of PCR are digested from RFLP enzymes, the patterns that occur can be seen with a DNA sequence, which are then analysed.

RFLP analysis may no longer be widely used but it has still been important in establishing our understanding of DNA analysis, while also spurring the development of new, more efficient techniques. It is likely that our current techniques will follow suit in the future by their refinement and replacement with even more advanced types of DNA analysis.

Y Chromosome Analysis
Share Your Story, Join the Discussion or Seek Advice..
RFLP is still widely used in species authentication in food industry like chicken, beef, and fish species identification. All the species will slightly differ in the sequence of the particular gene region Ex. cytB, coxi, 12S rRNA, 5s rRNA. DNA extracted from food sample of unknown identity will be subjected to PCR amplification of anyone of the above target gene region. After amplification, it will be cut by a suitable combination of restriction enzymes to give RFLP profile, which will be then compared with standard RFLP profiles and the species identity ofunknown food sample will be revealed
arun - 22-May-15 @ 12:04 PM
any chance someone could describe a specific case of this happening? even a link or something would help plenty :)
ThatPianoKid - 1-Nov-14 @ 8:09 PM
Title:
(never shown)
Firstname:
(never shown)
Surname:
(never shown)
Email:
(never shown)
Nickname:
(shown)
Comment:
Validate: