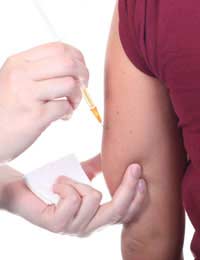 Most people in developed nations are not only familiar with the concept of vaccines but have probably received a vaccination at some point in their life. Vaccines help to protect us from serious diseases as well as work to reduce their spread. DNA vaccines are a type of vaccine that helps to protect humans from disease in similar ways to other vaccines. These vaccines do, however, hold some valuable advantages over traditional vaccines. To administer the vaccine, DNA that has been genetically modified is injected into a person to create an immune response. While still largely experimental, they hold promise for safeguarding humans from disease and the many devastating effects that occur as a consequence. This type of vaccine has been researched in relation to viruses, bacteria and parasites that cause disease.

Why Use DNA Vaccines?

Comparison of DNA Vaccines and Other Vaccines

To understand DNA vaccines it helps to have a sense of the differences between DNA vaccines and other vaccines used to protect from disease. First generation vaccines are those involving the entire organism, which may be live, 'damaged' or dead. Those vaccines that are live and attenuated trigger an antibody immune response as well as those entailing killer and helper T-cells. Still, there is a low chance that attenuated vaccines can still change to the toxic form, which means that in people with already weakened immune systems the vaccine could cause disease. Although vaccines that are killed do not have the same risk, they are not as effective in addressing a wide range of diseases.

DNA vaccines constitute a third generation vaccine. These are comprised of a round, relatively small bit of bacterial DNA that has been modified to release one or more particular proteins - also known as antigens - from a microbe. After injection of the DNA vaccine, the recipient's cells translate the DNA into toxic proteins that are viewed as foreign invaders, which serves to begin an immune response.

Thus far, the limitations of DNA vaccines mostly involve a lack of research, which will likely be remedied in the future when they become a more important area of interest. At present, there is a limitation in regards to microbial activity. While DNA is successful for providing an immune response when the target involves disease-causing proteins, there are some microbes that have an outer shell made of polysaccharides. Unfortunately, DNA vaccines are unsuccessful and instead, subunit vaccines that have a polysaccharide foundation are required.

Vaccines remain one of the most important developments of the twentieth century and they are responsible for saving millions of lives and even eliminating disease in some areas. Vaccines allow us to keep disease in controlled numbers and prevent the complications that arise when someone is afflicted with a disease.

DNA Testing for Pets
Share Your Story, Join the Discussion or Seek Advice..
I was just thinking, about a DNA vaccine for HIV. What properties are needed in a DNA for the development of one? I,m not a medic but I'm interested in DNA vaccines for the killer diseases. l like to be informed. thank you.
Pure one - 23-May-11 @ 4:50 PM
Title:
(never shown)
Firstname:
(never shown)
Surname:
(never shown)
Email:
(never shown)
Nickname:
(shown)
Comment:
Validate: