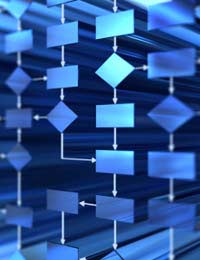 When most people think about DNA applications, they are likely imagining a complicated laboratory, complete with test tubes and scientists in their long, white coats. You may, however, be surprised to learn that DNA also relates to the field of computing. In fact, scientists have recently created a DNA-based computer that they believe will eventually bring about more rapid and accurate testing for disease diagnosis, including diseases such as West Nile Virus and bird flu. Not only that, but this type of technology could also be utilised to help create new ways to diagnose and treat diseases such as cancer or diabetes.

A team of researchers in the United States created a 'computer' that has DNA circuits rather than silicon circuits. While this type of DNA computer will not be as rapid as silicon-based computing with regards to speed, there are still other benefits. DNA computing can be used in fluids such as a blood sample. The researchers hope to make the procedure for diagnosing diseases such as the West Nile Virus a much better one.

By building a device that can differentiate between the different types of the virus, they hope to follow on that accomplishment by creating a way to also detect new bird flu strains. Even better, scientists are ambitious that DNA computers could even one day be placed in the human body to diagnose diseased cells and kill them. In diseases such as diabetes, it is thought that such a computer could also keep track of the condition and release insulin as required for the specific needs of that person.

One problem related to the development and use of DNA computing is that researchers have struggled for many years with the challenge of making a DNA computer that is as effective as a silicon-based system. The challenge relates to the nano-sized particles in DNA. Scientists hope to use DNA for providing the same success at solving problems as the silicon-based systems.

Researchers investigated the potential of the computer over the course of two years. To experiment, they had the computer 'play' a game of tic-tac-toe with human opponents and found that the computer won almost every time. Rarely, there was a tie but otherwise, the computer prevailed.

The computer is actually a more advanced version of the first DNA computer, which could only play a substandard game of tic-tac-toe. This more advanced version is comprised of nine cell-culture wells. These wells are organised in such a way that they actually look like a tic-tac-toe game board pattern. Within every well is a liquid consisting of DNA that has been coded with a fluorescent dye. The initial game move is always made by the computer, which activates the middle well. A human player makes the next move by adding a DNA sequence into one of the eight wells that remain. After this human move, the computer responds by feeding the strand into DNA logic gates that link up the wells, resulting in a green fluorescent glow in the well that the computer chooses for its responding move.

It is thought that this technique will help scientists to improve current techniques used to analyse samples of DNA. These same DNA logic gates are being used to differentiate between the different strains of several viruses. In the next decade, continued research will perhaps bring the computer up to its full potential.