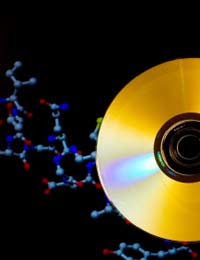 With just a little bit of DNA and some basic laboratory techniques, a DNA computer can be created to provide an enormous range of useful applications. The technology works through some interesting computer hardware known as logic gates, which are made of DNA. In fact, this development has led the way for the DNA computer technology that relies on DNA codes to operate instead of the usual electrical signals. Through DNA codes, the computer can successfully complete logic-based operations.

Logic Gates in a DNA Computer

Logic gates are an interesting concept that may also be a foreign one for most people. They are extremely small structures that operate by changing data flowing through a computer into a sequence of signals that the computer utilises to complete a multitude of operations. Logic gates in our current world of technology involve the processing of electronic alerts from substances such as silicon, which take two signals that are inputted and then translate these into a single output to allow for complicated operations. Previously, logic gates used in computers were comprised of electronic structures that picked up signals from transistors. Logic gates made of DNA, however, are an entirely different concept.

DNA logic gates are extremely small and they pick up various fragments of a genome as input before creating a single output from the fragments. Try to imagine a gate joining two DNA inputs to allow their end bits to lock. To fill in any gaps, an enzyme called DNA ligase creates an effective seal, which then results in a new strand. When electrophoresis is used, a scientist can measure the length of this new strand, thus giving an answer to the input strands.

DNA computers could help researchers to answer complicated mathematics problems that other types of computers have thus far been unable to solve. It is hoped that DNA computers will be able to mimic the way that our current electronic computers think and perform. In fact, one experiment found that a DNA computer works more effectively in comparison to a digital computer for the application of data analysis provided by logic gates. Whether the calculations were the ones commonly done on a daily basis or more complicated, the DNA computer performed successfully. Also promising was that the DNA computer would only require several hours to perform analysis on a huge amount of information, which far surpasses the centuries it would take for current computers to sift through the data.

Another exciting benefit of DNA computing involves DNA microchips. Scientists suspect that if the newer, developing DNA microchips are combined with logic gates, there will be even more beneficial applications. These chips could mean that DNA computing is more rapid because it would allow for a quicker analysis of the DNA strands that hold useful answers. Instead of using electrophoresis, scientists would be able to mix in labelled strands to the chip, which would meld to strands of DNA and allow for researchers to pick answers up via the labels.

It is thought that DNA could ultimately provide a very efficient and accurate type of memory within computers, similar in a sense to how it operates in a person's body. In fact, consider that one pound of DNA has the capability to hold more data than all computers that have been built. Not only that, but the actual computing power of a DNA computer - complete with DNA logic gates - is tiny in comparison with the most powerful supercomputer, which is similar in magnitude to a house. It is anticipated that DNA will be valuable in many applications that currently require computers. These applications include weather forecasts, designing transport solutions or breaking complicated and difficult security codes. As research advances, we will likely see even more benefits for DNA computing.