How was DNA Discovered? 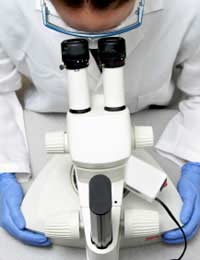 The identification of DNA and its structure is one of the most important discoveries of the twentieth century. The key individuals responsible for the discovery of the double helix structure of DNA were Francis Crick and James Watson. However, were it not for Rosalind Franklin, Linus Pauling and Maurice Wilkins, the two men would likely not have made the discovery following the crucial events that preceded their work.

The story of DNA's discovery is actually quite an interesting one that began in the early 1950s, when Watson, a biologist, and Crick, a physicist, were working together in a laboratory in Cambridge, England. Their work focused on the structure of DNA. Pauling, a chemist, had discovered an important structure of protein in 1951 and Franklin was a chemist working busily in a laboratory in France at the time. Wilkins, a physicist from New Zealand, was a director for a biophysics laboratory at King's College. In 1951, he took the first x-ray pictures of DNA, which later resulted in his idea that DNA structure could be helical, similar to the protein structure shown by Pauling. After Watson arrived in England, he saw Wilkins' pictures of DNA and went to the Cavendish laboratory in Cambridge where he met Crick.

Working out the Correct Structure of DNA

Pauling had previously published a paper in 1953, where he proposed that DNA had a triple helical structure. In fact, Watson and Crick had similarly suggested a three helical model in 1951 but the theory ultimately proved incorrect. The mistake was actually somewhat based on a falsely recollected conversation that Watson had with Franklin, when Franklin had said that she used x-ray crystallography to establish the water content of DNA. Watson ended up incorrectly recalling the numbers.

The Importance of Photo-51

What finally sent Watson and Crick in the right direction was Franklin's photo-51. The picture itself showed DNA that had been crystallized and showed a blurred X in the centre of the molecule, revealing a helical structure. When Watson received a copy of photo-51, he saw the importance of the X in it. Watson and Crick then modelled the DNA structure as a two-chain helix, with the characteristic anti-parallel attributes and bases paired to stabilise the molecule. Shortly thereafter, their model of DNA was published.

As with many discoveries, the question of who should justly receive credit can be a debatable one. Ultimately, it was the Watson and Crick paper that was published in the journal Nature in 1953, although directors at both the Cavendish and King's College laboratories had suggested to Nature that the paper by Watson and Crick as well as those by Wilkins and finally, Franklin and Gosling, be published in sequence. It was in 1962 that Crick, Watson and Wilkins received the Nobel Prize. Generally, however, when the topic of DNA discovery occurs, it is Watson and Crick who seem to be mentioned but it is important that others who contributed greatly to this important discovery receive recognition as well. Franklin's photo-51 in particular was a major aspect in facilitating the discovery of the DNA double helix. The discovery of DNA would eventually have a significant impact on science for years to come and still, today, remains a key area of research in the twenty-first century. Learn more about DNA structure.
Next Page

An Overview of DNA Functions

All About DNA and Proteins

The Properties of DNA

DNA Sequencing
Share Your Story, Join the Discussion or Seek Advice..
[Add a Comment]
homework is killing me
joe mamma - 6-Jun-22 @ 1:19 PM
bored
ligma balls - 23-May-22 @ 3:33 PM
The photo-51 that Franklin had discovered showed DNA had been crystallized and a blurred x in the center of the molecule revealed a helical structure
Alex - 29-Nov-18 @ 3:48 PM
The story of DNA's discovery is actually quite an interesting one that began in the early 1950s, when Watson, a biologist, and Crick, a physicist, were working together in a laboratory in Cambridge, England. Their work focused on the structure of DNA.
beat rice - 29-Nov-18 @ 3:41 PM
I am glad to see that Rosalind Franklin is getting the accolades that she deserves for the discovery of the double helix shape. It's too bad she died before she could get this credit!
Cyn - 28-Nov-18 @ 4:47 PM
The photo helped us develop and know more about DNA
Jatziry - 28-Nov-18 @ 4:14 PM
DNA is small that it must be observed through a microscope, or at least whatever is containing it
Platinum - 28-Nov-18 @ 4:13 PM
Photo 51 explains how Watson and Crick used a copy of a photo from Franklin that showed the structure of DNA.
DLR - 28-Nov-18 @ 4:10 PM
The picture itself showed DNA that had been crystallized and showed a blurred X in the centre of the molecule
me - 28-Nov-18 @ 4:10 PM
The functions of DNA are vital for inheritance, coding for proteins and the genetic blueprint of life. Given the enormity of DNA's functions in the human body and its responsibility for the growth and maintenance of life, it is not surprising that the discovery of DNA has led to such a great number of developments in treating disease. DNA holds the instructions for an organism's development and reproduction
BEATRICE TORRES - 28-Nov-18 @ 4:08 PM
the importance of the photo led to a great and very important discovery
izedgreentea - 28-Nov-18 @ 4:07 PM
Thank you so much for this. Most articles don’t even mention Franklin or wilkin. This is extremely helpful for my research project. I find my self just coming back to different parts of your site repeatedly. I’ll be sure to recommend this to other people
Nam - 23-May-18 @ 10:33 AM
Sorry to read thatRay Gosling (Franklin's PhD student) has not been credited with preparing the DNA for, and then taking, photograph 51. See Nature 2013:496; 270.......... Even the greatest scientific discoveries come with an element of the mundane. A humble paperclip was biophysicist Raymond Gosling’s choice. Late one night in May 1952, in a chemistry lab in London, the PhD student wrapped DNA around a paperclip to keep the molecule’s fibres stretched taut in front of an X-ray source so that he could analyse their structure. The result was the celebrated ‘photograph 51’ — the image that told James Watson that DNA strands curl around each other like a twisted ladder, and that the specific pairings in the rungs are key to the mechanism of inheritance. Watson and Crick’s paper features only a glancing concession to being “stimulated by a knowledge of the general nature of [Wilkins and Franklin’s] unpublished experimental results and ideas”. There is no mention of Gosling by name. Gosling left research soon after, with no bitterness; in his words, he “was no good at it” Discoveries take ego, genius, conflict, inspiration and fierce ambition. But they also need the hard graft of PhD students who beaver away late into the night and improvise with what they find in the stationery cupboard. They do not always receive the recognition that they deserve. Raymond Gosling is a good place to start to reverse that trend
None - 12-Jan-18 @ 10:50 AM
Wow this is amazing and really helpful for homeworks too! :D
Aleks - 16-May-17 @ 6:22 PM
copy into a timeline for my homework :) it was helpfull
your mind - 7-May-17 @ 2:51 PM
I Can recognition in 1945 this was discovered but how you might wonder well i am 64 of age and i am very experienced in science. so lets begin the games
tapaspatas32 - 21-Sep-16 @ 10:04 AM
Our school education should have 'Vocational Guidance and Modern History' like the important DNA discovery and when oil was first drilled out of the ground (US 1859) and history of our democracy and why the vote is important! rather than archaic didactic compulsory Religious Education.Interfaith as well is what would help bridge 'gaps'.
Mrs Walker - 20-Sep-16 @ 8:12 AM
am grateful for making my research a successful one
elainike - 20-Aug-16 @ 12:00 PM
Articles like this are very helpful thanks
itsing - 5-Mar-16 @ 1:44 PM
Only doing this for my homework so don't know if it's true
Macja - 14-Jan-16 @ 9:26 PM
It is not correct article regarding the discovery ...DNA itself was already know long before 1953...not agreed with article...
jimmy - 7-Sep-15 @ 8:28 AM
thanks this as very helpful for my science class :)
cool - 29-Jul-15 @ 12:29 AM
I can't stand all this science mumbo-jumbo. I'll just stick to me Kabin, if you don't mind...
Norris Cole - 9-Jul-15 @ 9:43 AM
"How was DNA discovered"is not the correct title for this article. Your article is about the discovery of the *structure* of DNA.DNA itself was already know long before 1953.Check the work of Levene, Chargaff, and the real discoverer, Miescher.
johnty - 9-Apr-15 @ 3:27 PM
I needed this for a science project thank you!
j jhki - 18-Feb-15 @ 8:09 PM
I found this helpful thank you
buda - 12-Sep-13 @ 5:41 PM
No. I found out the DNA structure and I was the one to publicize this method, please do not lie about this again or I shall indeed call upon the Copyright act of 1998. Thank you Prof. J Savillion.
Prof. J Savillion - 11-Jun-13 @ 2:20 PM
Could you all please learn how to spell and use proper grammar.
Jane - 30-Jan-13 @ 3:13 AM
really helpfull to do homework thank god wooooooooooo Aled Gwyn
milkman - 15-Oct-12 @ 9:14 PM
umm make it a little bit easier too read please thanke you:)
madipooo - 21-Dec-11 @ 1:24 AM
Title:
(never shown)
Firstname:
(never shown)
Surname:
(never shown)
Email:
(never shown)
Nickname:
(shown)
Comment:
Validate: